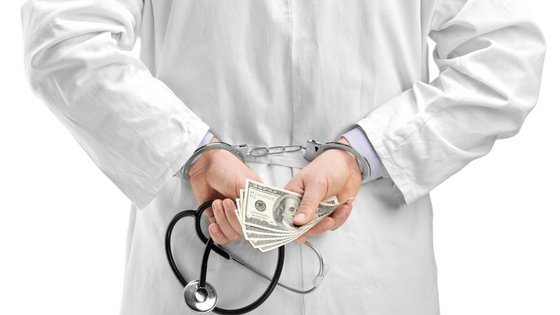 Is Your Practice at Risk for Embezzlement?

Employee theft is shockingly widespread in health care. How to spot it and stop it.

Data breaches in health care are widespread and growing, but cybersecurity isn’t the only threat to medical practices. Embezzlement and theft occur more often in health care than in most other industries, according to Medical Economics.

Industry data show that medical practices lose up to $25 billion annually because of theft and embezzlement. This could range from pocketing a $20 copay to elaborate schemes that funnel hundreds of thousands of dollars from a practice over many years. Shockingly, the culprit is often a trusted employee.

A whopping 83 percent of practice administrators reported that they had worked for a practice where there was employee theft or embezzlement, according to a Medical Group Management Association survey. We’ve gathered expert advice on how to spot, stop, and avoid embezzlement in your medical practice.

Even in 2017, many practice embezzlement schemes are surprisingly low-tech. Check fraud is one of the most common ways for employees to steal without being detected. A practice administrator in Oregon, who was ultimately arrested for stealing over $250,000 from her employers, told Medical Economics that it began with a stack of signed, blank checks given to her by the physician owners to pay bills.

Every few days she’d write a check out to herself and enter a valid vendor into the system to cover her tracks, she explained. When a check for $8,000 came in the mail from an insurance provider—a settlement for an old claim that had already been written off and was never entered into their new practice management system—she simply pocketed it, thinking the money would never be missed. She was right.

Profile of a typical embezzler: female, mid-40s, working in finance or accounting

While thieves come in all types, this practice administrator actually fits the profile of a typical embezzler, according to Christopher Marquet, owner of a Boston-based investigative, litigation support, and due-diligence firm and author of “The Marquet Report on Embezzlement.” The average age of a perpetrator is about 48 years old, and over a six-year period, 61 percent were women, he told the American Physical Therapy Association (APTA). Of these, 71 percent worked in finance and accounting positions.

Stealing from the petty cash drawer is another one of the most common offenses, health care attorney George Indest told Physicians Practice. One bookkeeper at a dermatology practice in New York stole approximately $723,000 in cash over the course of seven years, the article reported.

Using practice credit cards for personal purchases and applying for company credit cards for themselves are other ways employees may be stealing from a medical practice, according to Indest.

Often, one of the first signs that an employee might be embezzling funds is evidence of extravagant spending. The practice administrator in Oregon told Medical Economics she “used the stolen money to spend lavishly on clothes, jewelry, tanning salons and fancy restaurants. She got breast enhancements and a tummy tuck, and treated friends and family to extravagant parties and vacations.” If a lower-level employee starts showing up at work in an expensive car, that could be a red flag, even if he or she attributes it to a spouse’s success or an inheritance.

Lavish spending or being secretive are common traits of an embezzler.

If an employee is secretive about their job or refuses to delegate, that could be a warning sign of a dishonest person who does not want others checking up on them. “If your billing staffer refuses to take a vacation, be aware that this is a common trait among employees who embezzle,” reported Physicians Practice. “Insist on a vacation, and use the time to check over the employee’s work.”

How to protect your practice

There are many ways you can safeguard your practice against employee theft and embezzlement. Here are just five:

Conduct background checks on all employees. You will need to disclose this on your employment application. Also, be sure to ask about prior convictions and any other names or versions of names that applicants may go by, recommended Indest. Even though only 5 percent of embezzlers have prior criminal records, according to Marquet, it shows staff that you are paying attention.

Don’t make one person in charge of all the finances. Segregation of duties is the most critical way to safeguard against embezzlement, fraud expert Diane A. Matthews said in the APTA article. “One person should not control the entire accounting process. For example, the employee who pays the bills (writes the checks) should not be the employee who reconciles the bank account.” In small practices, the head of the practice should be involved in the daily operations, approving all payments, having bank statements sent directly to him or her, and keeping an eye on the record books.

Open your own mail. This not only prevents check theft, “but a low-level staff member probably won’t know enough about the practice to recognize when something coming through the mail is amiss, such as overdue notices if a bookkeeper is diverting funds,” stated Physicians Practice.

Sign your own checks, but watch out for “check batching.” Also referred to as “check ambush,” this scheme involves handing a doctor a stack of checks to sign at a busy time of day. For instance, “the employee knows the doctor needs to leave at 4 p.m. to get to his son’s soccer game,” fraud expert and accountant Michael Lewis, told Medscape. “The doctor often signs the checks without looking at them. He may sign one for a phony company that the employee set up.” Putting recurring bills on a company credit card cuts down on checks and may be a safer option, plus you can accumulate any credit card rewards for the practice.

If you’ve got it, don’t flaunt it. According to Marquet, the overwhelming motivation for theft is desire for a more lavish lifestyle, which accounted for 60 percent of reported embezzlements. “Many employees are jealous of the doctor’s earning capacity,” Lewis agreed. “They are sometimes angry at how physicians treat the staff or patients. I don’t recommend that physicians invite employees to their homes. They see how well you live and figure you won’t miss what they’re stealing.”

Of course, theft from other doctors in the practice is possible, too. There have been cases where a partner was stealing from the practice retirement plan, or running their own home utility bills through the practice, reported Physicians Practice.

For more on topics like this, check out the practice management section of our blog archives, and subscribe to our newsletter today so you don’t miss a post.