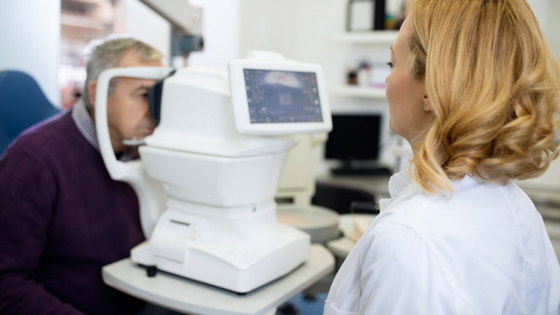 With no cure in sight, ODs may be able to make an impact through patient education and early detection

More than 5 million Americans are living with Alzheimer’s disease. That number is expected to rise to as much as 16 million by 2050, according to the Alzheimer’s Association. One in 10 people age 65 and older has Alzheimer’s. The disease is the sixth leading cause of death in the U.S., killing more people each year than breast cancer and prostate cancer combined.

It turns out that optometrists may be uniquely qualified for early detection of Alzheimer’s in patients, according to Stuart Richer O.D., Ph.D., director of ocular preventive medicine at James A. Lovell Federal Health Care Facility in Chicago.

“The eye and brain share similar embryologic origins,” he wrote in the Optometry Times, noting that Alzheimer’s affects visual fields, eye movements, and pupil and optic nerve function, as well as the brain. “As ODs, we intimately examine the ocular-cerebral system daily.”

What, if anything, can optometrists do to address this devastating disease with no current cure?

The two types of Alzheimer’s disease

There are some misconceptions about Alzheimer’s disease (AD), the most common form of dementia—a general term for loss of memory and other cognitive abilities “severe enough to interfere with daily life,” according to the Alzheimer’s Association. But while the greatest known risk factor is increasing age, Alzheimer’s is not a normal part of aging.

Much is still unknown about the causes of Alzheimer’s, but genes and amyloid plaques in the brain are factors.

Approximately 200,000 Americans under the age of 65 have early-onset Alzheimer’s. One cause is thought to be certain rare genes which, if inherited, can cause people to develop Alzheimer’s symptoms in their 30s, 40s, and 50s. While there is no one test that confirms Alzheimer’s disease, family history is a risk factor. With more about genetic testing in the news, patients may bring this up with their doctors.

Far more common is late-onset Alzheimer’s disease. The causes are not well understood, but amyloid plaques that build up in the spaces between nerve cells are “prime suspects” in damaging and killing brain cells, according to the Alzheimer’s Association.

Here’s where ODs come in: “There is an intimate connection between amyloid ß-protein found in AMD drusen, a type of peripheral cortical cataract, and AD pathology,” wrote Dr. Richer, adding, “Noninvasive imaging techniques have emerged that accurately and noninvasively detect and monitor amyloid deposition in the human lens and retina.” Detection and clinical staging of AD using vision and ophthalmic imaging are close at hand, he stated.

Why patient education is imperative, particularly for minorities

At this time, with no cure or treatment to stop the progression of Alzheimer’s disease, patient education is the best course of action. Proactive and targeted information may be necessary to reach underserved patient populations in particular.

Women, African-Americans, and Latinos are far more likely to have Alzheimer’s than other patient populations.

For a related post, see Is Your Patient Education Failing Your Female Patients?

The number of U.S. Latinos with Alzheimer’s is expected rise by more than eight times by 2060, to 3.5 million, according to a new report discussed in Kaiser Health News (KHN). “As a group, Latinos are at least 50 percent more likely than whites to have Alzheimer’s, in part because they tend to live longer.”

Because Latinos are more likely to use informal and more affordable care options, as opposed to institutionalized care, the report calls for improving training and resources for families in both English and Spanish. If they are not educated about Alzheimer’s, they may be inclined to brush off its symptoms.

Dr. William Vega, one of the report’s authors, told KHN, “Too often people will see Alzheimer’s as a result of old age, but this brain-deteriorating disease is not natural.”

Along with the myth that Alzheimer’s only affects older people, many myths persist about risk factors. It’s important that doctors debunk these myths. Alzheimer’s is not caused by aluminum cans or pots, silver dental fillings, aspartame, or flu shots.

How ODs can help

Eye care providers are uniquely positioned to help combat the Alzheimer’s crisis in part because of their access to patients. “As ODs, we examine about one-third of the U.S. population yearly,” noted Dr. Richer.

ODs can debunk Alzheimer’s myths and educate patients on how to reduce risk factors.

Without being an Alzheimer’s expert or diagnosing the disease, you can still advise patients on potential risk factors associated with brain aging and dementia, he believes. “This is accomplished by counseling patients on how to reduce environmental toxins such as sugar and prescribing nutrients for repair and maintenance of both the eyes and brain.”

For more tips on the most effective ways to educate your patients, see the Patient Education section of our blog archives.